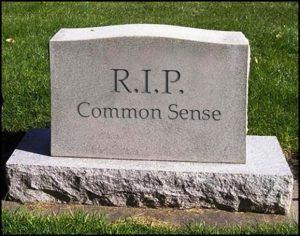 The other day I was killing time scrolling through Facebook. I came across a video of a family enjoying an afternoon near the water. The cameraman is focusing on an alligator and you can see the guy waving his foot back and forth in front of the creature’s mouth. Now, my inner demonic side yells out, “BITE IT!!!!” It didn’t. But I was rooting for the scaly beast simply because if you’re dumb enough to do that, you get what’s coming!

The video continues with the Alligator lazily swimming away and then a young girl jumps into the water right next to the giant floating teeth brigade. You hear her say, “Woah. That was close” as she swims back to shore. No other reaction from her family, no screams or mad dashing to get the young girl out of the water. Everyone just went about their business.

Needless to say, I was shocked. This is a wild animal with very sharp teeth just waiting to clamp down on any free appendage. What are these people thinking!?! Have they heard of a little thing called Common Sense??? Are these the kind of people that still need warning labels above light sockets?

You have to see to believe

Further research into this finds that they rescued the animal when it was injured and nursed it back to health. When they set him free, it remained near the family and has some how become the family’s unspoken pet. They even say the Friendly Neighborhood Alligator keeps other Non-Friendly Alligators away from his/her adopted family. They even named it Pete!

The video reminded me again that there is a severe lack of common sense in today’s world. While this video starts out to be a contender for the Darwin Awards, It does save itself with the backstory. You may think it’s tame, but this is a wild animal and needs to be respected as such.

Now I’m not saying that I never did anything stupid when I was younger. I was a teenager once with friends that had the same kind of judgment skills any young bored teen has. I clearly remember watching that large tree branch heading straight for the car window while driving dangerously down a dirt road (it was actually recklessly driving down a dirt road while skidding sideways onto a neighborhood street) stopping inches away from said tree branch impaling us through the car window.

We ran into the same temptations when we were younger and did some pretty idiotic things as well, we were just lucky social media wasn’t around to show the world how dumb we really were. Still, we figured out all on our own that while licking a double A battery was fun, doing the same to a car battery is not. We didn’t need to hear a story about someone doing it to know not to do it. Common sense, right?

Sadly, that common sense thing has gone away. How many stories have we read or watched online about young kids walking up to a Police Officer who has his gun drawn or is asking you to stop and you continue to approach and are shocked when the office opens fire.

How about the countless videos that flood our social media feeds with some road rage incident that leads to a serious accident and some innocent is hurt or killed.

Hikers going out in 100+ degree weather and end up lost and needing rescue due to heat stroke or simply getting lost.

Pet owners leaving their four legged friends in a car during the summer, or even worse their small child.

Drunken idiots walking along the beach and finding a young shark swimming along the shore and decide to grab it by its tail.

Buying lemonade from a homeless man standing next to a urinal.

Most of us would go through that list and not have a doubt about what the right thing to do is, but there is a surprisingly high number of people out there that will see this list as a challenge. Yes, even the lemonade. How many of you have friends out there that would goad someone into doing something stupid?

“Oh, I’m just running in for a minute, but then my friend called me and we got into a long conversation.”

“That f*cker cut me off!! Let’s pay him back, who cares about the bus full of school kids and nuns are right next to us.”

We are do stupid things

I am guilty of doing this as well. New Years Eve a few years back we’re all drinking and suddenly I think it’s a good idea to convince my Easily Persuaded Friend to strip down naked and run down the street naked screaming, “Happy New Years!” He said no, of course, but it didn’t take long for a few others to pick up the chant and we all start saying he should do it. This story does end well. When I saw that he was actually going to do it, we stopped him, but then we had to convince him NOT to do it.

There are a few upsides to this. Comic relief. We will always have plenty of funny videos to help kill time while we should be working, like right now!

So while the majority of us will remain in wonder at this shockingly lack of common sense, without people like this we would have less to laugh at. Keep that in mind and enjoy! And make good decisions, or we could be seeing you doing something like this: